Here at The Canna Consultants we recognise that the cultivation of cannabis via indoor facilities and light-supplementing greenhouses has an incredible drain on energy and that far from being “green” our industry is often just the opposite. Along with our staff we spent time during lockdown refocusing on our footprint and that of the industry we love and support.

Our in-house consultations resulted in three main categories we were to prioritise:

We decided to calculate the business footprint first, which involved an in-depth look at what we did and how we did it. We collated the main topics, which included electrical appliances, heating and air conditioning. We also included “hidden” elements, such as internet usage – including our server, the websites, emails and traffic, along with Zoom and Wi-Fi. Next we turned to transport and travel – planes, trains, other public transport, taxis and cars – and our accommodation – offices and hotel stays. Finally, we addressed food, drinks and the 10,000 cups of coffee alone that the team drank annually.

We estimated that we needed to offset 142 tonnes and began exploring how we could actually offset that amount. Our first off-set of 11 tonnes resulted in “11 trees” or, more accurately, 11 saplings being planted. The team were less than impressed and, having done so, we discussed the problems with such schemes and the option of going even further. We then looked to other humanitarian schemes to offset the remaining 131 tonnes.

The Staff as Individuals, not Employees

The next step was to chose to offset each staff member’s personal footprint – estimated at 14 tonnes each. This we did, equating to a further 168 tonnes per annum, which we offset in 2020.

Collectively the owners and staff decided that not only would the company ensure that itself and the staff (as individuals) be carbon neutral, but that as a collective we would be carbon negative.

Therefore, from 2021 onwards we have decided to offset more than the aggregate annual footprint of the company and the personal lives of the individuals who form that company. In doing so we have committed to the offsetting of 408 tonnes (at 34 tonnes per month with https://www.carbonfootprint.com), thus ensuring that the company removes not only its own footprint, and that of the personal lives of its staff, but that it goes on to remove a further 98 tonnes more than they are collectively responsible for.

A Change of Behaviour

Whilst doing more than most, the problem is that these actions do not reduce the immediate and on-going impact on the environment, and so we sat down again (on Zoom) and set each other targets: less energy usage, less meat, less travel (more Zoom), less waste and a policy to switch to electric vehicles by the end of 2021.

We also instigated further measures, such trying to be paperless, using recycled paper where printing is essential, avoiding single use plastic and team Beach Cleaning days. These are small steps in themselves, but create a culture of sustainability.

Finally, we looked at the industry as a whole: sustainable energy, new technology and waste reduction. For our cultivation partners we have engaged in a move to LED lighting, water, energy reuse, anaerobic energy generation from waste biomass, hydrogen and solar power. We hope to be able to report that by the end of 2022 our clients will have generated in excess of 30 mega watts of renewable energy and that some of that will be fed into the national grids in jurisdictions across the EU, UK and globally.

While we are undoubted experts in the Cannabis world, we do not profess to be so in the sphere of carbon offsetting and so we are open to suggestions as to what other steps we could take, and we welcome your comments in that regard. Our offset certificates are published on our website and the team who’s mantra is: “Be careful who you listen to” – really want to “listen to” you! 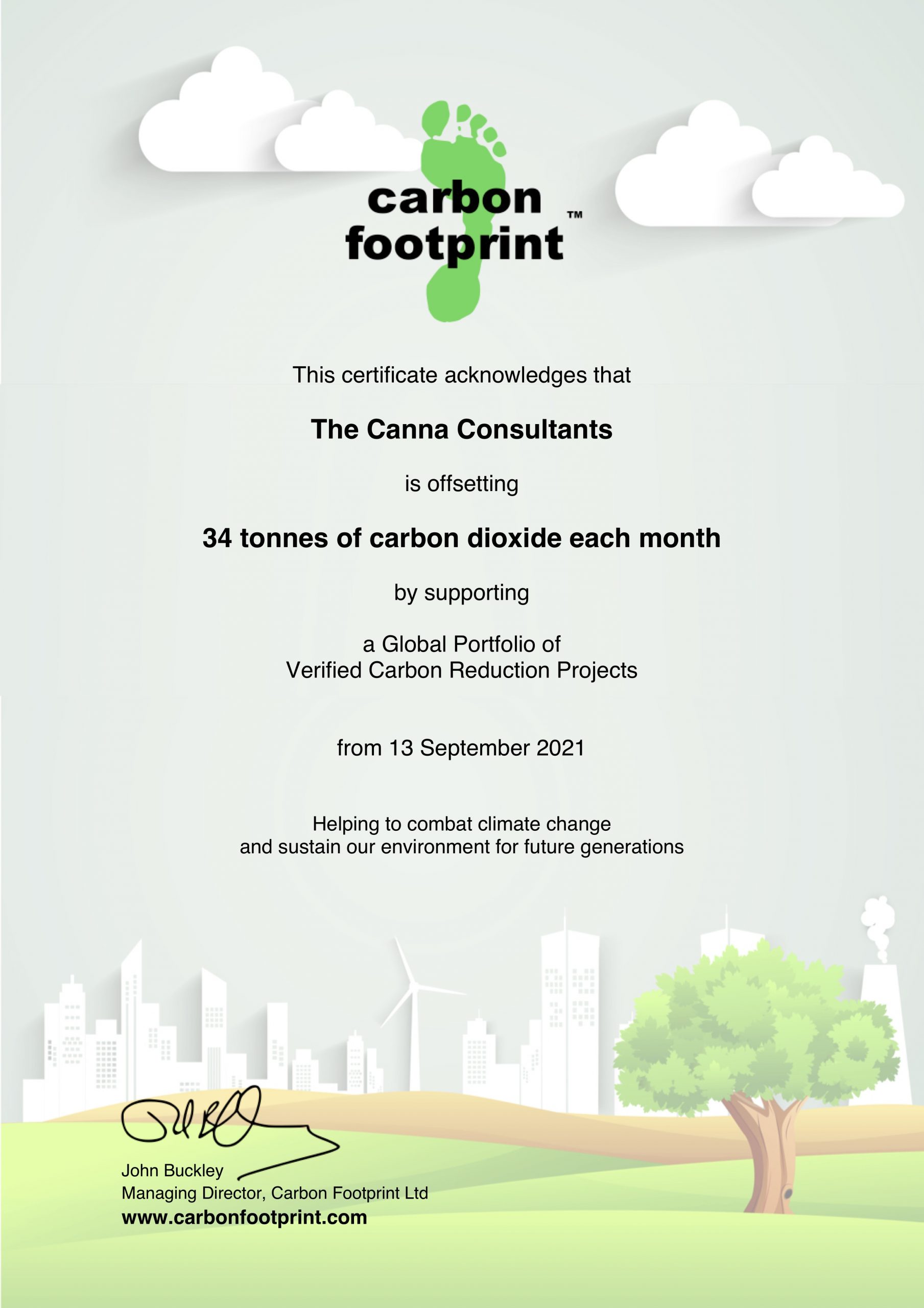